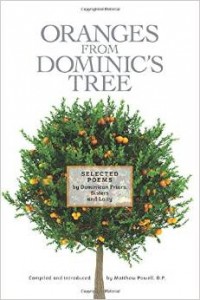 Oranges from Dominic’s Tree is a selection of poems by Dominican friars, sisters and laity, compiled and introduced by Matthew Powell OP. As explained in the introduction, ‘The title of this anthology, Oranges from Dominic’s Tree, comes from the tradition that Saint Dominic planted an orange tree in the garden of the Priory of Santa Sabina in Rome. A series of orange trees have grown in that garden for almost nine hundred years, each taken from a shoot of the previous tree. Dominic’s tree still produces oranges.’

The two following poems are by Paul Murray, who was born in Ireland, and joined the Irish Province in 1966. He has lived in Rome since 1994, where he teaches at the University of St Thomas Aquinas (Angelicum). He is also the author of The New Wine of Dominican Spirituality: A Drink Called Happiness.

are the texts of the Masters,

and the text and title

of my greatest learning,

Not at the pointed

or at the furthest edge

but here, in the even

of wind and weather,

here in our hidden threshold

here we must wait

until the doors of the present