The following presentation was given as a part of the 800 years jubilee celebrations in Lund on May 20-22, 2016 by the Master of the Order, Bruno Cadoré OP.

This title Word and Truth – chosen for this dialogue at the time of the celebration of the Jubilee about the Preachers – clarifies the horizon even of the mission of the Order. We indeed like to say that the Order – nuns, sisters, laity, brothers – are joined together in a common seeking the truth, of which they wish being the “servants” in the middle of their contemporaries.

In a context of deep changes of the knowledge, societies, Church, Domingo de Guzman wanted this Order entirely devoted to the Word. But, we well know that Christianity is not the religion of a “book”: it is the religion of a “word” addressed to humanity by The One which is Alpha and the Omega. To be a preacher, it is to put oneself at the service of this addressed Word, to engage all his or her life to be servant of the conversation which God – as revealed by Jesus-Christ – wishes to maintain with humanity that It created, with which God establishes an Alliance, and with which He promises the grace to be one day in full communion with Him. END_OF_DOCUMENT_TOKEN_TO_BE_REPLACED

The following presentation was given as a part of the 800 years jubilee celebrations in Lund on May 20th, 2016 by sr. Catherine Droste OP. 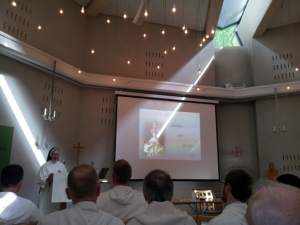 800 Years of Dominican Joy; 800 years of men and women participating in this joy – not only the members of the Order but also the millions outside the Order who have been touched by the joy of Dominic and his followers throughout the centuries.

Dominican joy overflows – it proliferates, extending beyond the individual to impact the lives of others. Yet, what is the essence of this joy – and what is its source? END_OF_DOCUMENT_TOKEN_TO_BE_REPLACED